Dave Bonta's Haibun poem about an unexpected car breakdown in a small town, "In West Virginia," the second poem in his recent book, "Failed State," is the inspiration for Jack Cochran and Pamela Falkenberg's film poem, which finds arresting audio and visual correspondences among landscapes taken over by strip malls, strip mines, and strips of highways.  Text of the poem by Dave Bonta:  In West Virginia  Strip. Lay down your overburden, bare your black seam of heat where the shovels can reach it. Let groundwater tease your acids from the rock.  Strip: stripe of highway-side gas stations and inconvenience stores, chain restaurants, big box retailers and motels, each marooned on its own island of tarmac. Nobody calls this home, not even the natives.  Strip: supposedly comic, unmoving pictures starring the same faces, day after day. We grimace at the punchlines: Neighborhood Grill and Bar, says the Applebee’s sign. Oh, do let’s take a stroll ’round the Village Square!  With our car in the shop we navigate the strip on foot, automatic jaywalkers. The smell of fryer grease mingles with exhaust. Under one streetlight, we step carefully around the corpses of three starlings. Not for them this Mattress World, this Furniture City.  singing in the body shop waiting room Jesus loves her 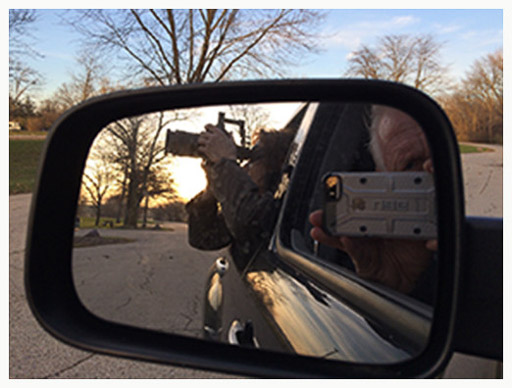