There is no such thing as one coherent body. We are a multitude, contradicting, overlapping, fading and melting into each other. Unstable Matters came through my occupation with the body, or what we call so, in a capitalistic system like we live in, in which our bodies are integrated and merchandised as other goods, in which we dissolve as human beings. Especially what it means having a female body incorporated in this system. A system that capitalizes female bodies as a source of profit (or labour) and expropriates women from self-determination over their own bodies. It raises questions about the relationship between physical identity and a social environment permeated by technology. Corporeality becomes recognisable as a permeable and deformable medium that is threatened by fragmentation and external control. It deals with the sentiment of alienation. Alienation to ourselves and the world we live in. Alienation but also longing at once. Longing for something or someone to hold on when everything around us seems to fall apart. Nostalgia for a time we never knew but we imagine to be better and the imagination not being part of this world, so we could just go home after our journey. One day. A phantasm that keeps us from breaking threw stagnancy. 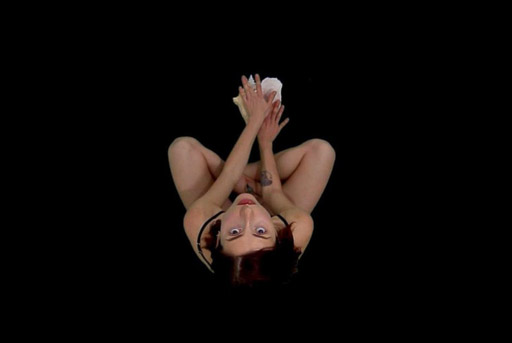 Lisa Kaschubat is an artist from Berlin who mainly works with video installations. She studies at the University of the Arts with Monica Bonvicini and Mathilde Ter Heijne. Her work encompasses the themes of physicality, interpersonal relationships and emancipation and their connection points to technology and virtuality. She recently exhibited in the Kunstraum Bethanien and in the Silent Green in Berlin.