"Aquatoria" is an abstract poetic video painting, experimental movie balancing on the verge of video art and cinema. Author’s reflection on the club movements of the 70-80-90s. All footage was shot at dawn, accompanied by the original soundtrack without narration.  The main character is the Disco ball. The Сaptain shoots him with a bow, and accidentally falls into the dream of an Indian, a lighthouse keeper, who demonstrates to the Captain three women - present, past and future. Each of them escaped from a noisy party and welcomes a new day at the port.  The Disco ball collects all the characters into one story, drawing the viewer's imagination into a trip, a dream, a state of fragile idyll, when the world comes to life. In this movie, it is not a person who looks at the sun, but the sun turns its gaze on it. Art is not a reflection of reality, but a reality of reflection. Everything is reflections!  The film could be shown on three screens by three FullHD projectors, or on the one screen by a 4K projector (in this case it will be a single-channel video file 5760x1080). 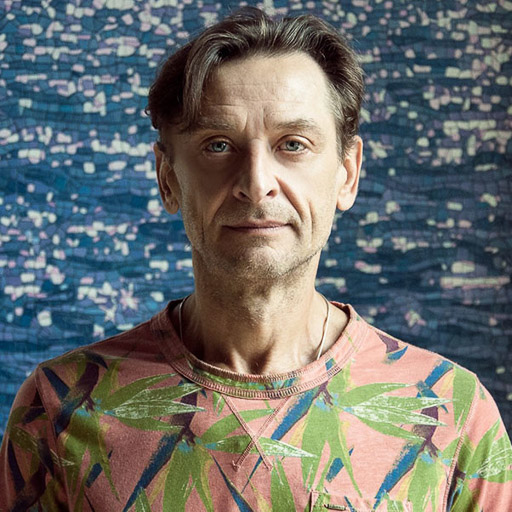 Biography of Anatoliy Gankevich Born in Odessa on August 24, 1965. In 1981 he graduated from Odessa art school. He took individual painting lessons. In 1993-1994, he attended courses at the George Soros National Center for Contemporary Art in Moscow. Since 1990, he began his professional career as an artist. Since 1991, he engaged in video art, the first video installation “Cleansing” in the gallery of Marat Gelman. In 1992, he implemented the first pictorial project “Communion”. In 1993, he showed the first performance of “Resuscitation of a still life” in the Odessa Literary Museum. In autumn 1993, he took part in the international festival of performances in Lublin (Poland), in the gallery “Labyrinth”. From 1995 to 2005 he was actively engaged in directing commercials and music videos, as well as producing visual effects in the film industry. Since 2006, he has focused on his art projects in such areas as painting, drawing, sculpture, and video art. In 2020, he released his first experimental movie "Aquatoria", the first film of the trilogy “Gaze of the Sun”