orchestra for the multiplicity unity of worlds

Sound-visual found footage on 18 analog TVs with DVD and a digital projector. My creating method is a mashup many existing films from the Internet, supplemented with my own recordings. I composed my visual orchestra, I build sound on the basis of samples. Technological aspect is not to manipulate video material in time, where the image and sound are played one-to-one. The work begins with rhythmic images/noise on the TVs, regulating the orchestra’s harmony. For the next minutes, dozens of different instruments come together and separate, sometimes they come back, some of which we will never hear again. Completely unknown musicians, connect with such icons as Nina Simone and Buddy Rich. The images from the TV sets and the projector interpenetrate, I composed the whole in color, finding a common part also in the visual layer. I use the aesthetics of cacophony, sometimes to synchronize the images or to desynchronize them. I tried to create a common sound of seemingly different worlds. 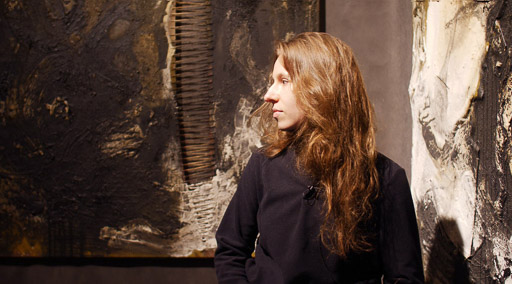 In my art activities, I deal with broadly defined visual art, from painting and drawing, through photography to sound-video film productions and installations. I am fascinated by the relationship of analogue media to the modern world. I like experimenting. I often use the technique of the broadly understood collage, like found footage. In artistic work, I am most interested in people and their relationships, which I can translate into my own experience. I see the world as a system of interconnected vessels. I love books and rock&roll.